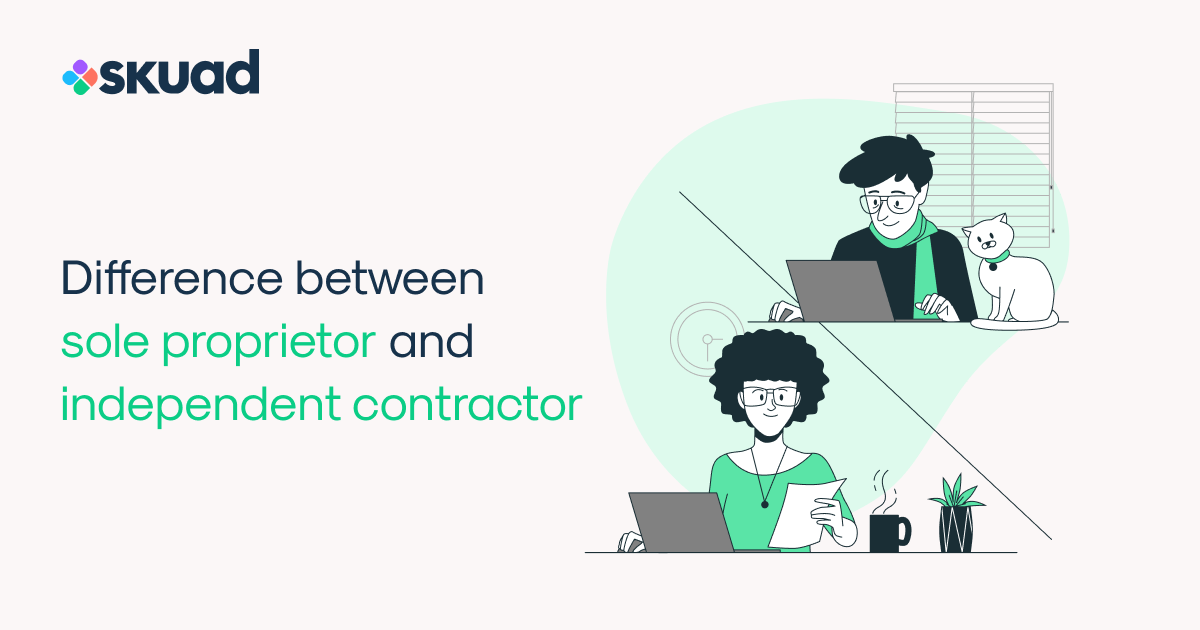 To be sure of full compliance with the law, including classifying your employees properly, your company can partner with Skuad, a global payroll and human resources company, which can help you hire, onboard, and pay remote employees and contractors while staying fully compliant with the law in over 160 countries. Contact us to get a demo today.

Who are sole proprietors?

A sole proprietor is someone who is in business for themself and is not an incorporated business. “Sole” means single, or one person, and “proprietor” is another word for owner. It may differ in other countries, but in the United States, this is the default business type and requires fewer formalities than other business types, such as single-member limited liability companies (LLCs), multi-member LLCs, partnerships, S corporations, C corporations, and benefit corporations (B corps). In general, there is no legal separation between the individual and the company.

Definitions in other countries

In some countries, a sole proprietor is defined differently than in the United States. Some countries have a slightly different name, such as "sole trader," but that means essentially the same thing.

The countries in the preceding list are just a few examples of how different nations have different definitions of business structures. The countries in which you are going to be hiring or contracting will have their own laws and definitions. It is important for your company to look into the specific laws and definitions of various business entities to ensure you are contracting with an independent contractor properly and are not misclassifying employees as contractors.

Further information on the dangers and consequences of companies misclassifying employees is found in the next section. Partnering with an employer of record such as Skuad, a global human resources and payroll company, can help ensure full compliance with local labor laws as well as mitigate the risks of employee misclassification.

Who are independent contractors?

Independent contractors are defined as self-employed individuals who are contracted by an entity, such as a business or other client, to offer their labor and services, and who are not employed by the client company or customer. These individuals may be sole proprietors, as owners of their own service business, or they may be a part of a partnership or limited liability company. The entity paying the independent contractor does not pay the contractor benefits. Independent contractors are responsible for paying their own taxes, including contributions that would normally be at least partially contributed by an employer, such as both the employee and employer shares of social security contributions.

The consequences of a company misclassifying an employee as an independent contractor include fines, liabilities for unpaid wages and mandatory benefits, payment of severance, being banned from doing business in a country, and even potential prosecution for fraud. The prosecution for fraud could be the result of a government authority deciding that a company deliberately misclassified its employees as independent contractors to avoid paying certain tax contributions, to avoid paying statutory benefits, or to nullify the labor law protections the employee would have gotten if they were correctly classified.

The differences between independent contractors and employees

Each country will have its own laws and definitions, but there are some general differences between independent contractors and employees.

Each country may have its own criteria for defining “employee” and may go about auditing companies differently. In general, there are some common differences between an employee and an independent contractor.

When seeking to form a remote team, your global business will be looking to find the best talent in countries all over the world. It is important to know the local laws or partner with an employer of record to ensure compliance. Your company may choose to hire employees rather than contract with contractors for several reasons. Your company may want to avoid labor law violations or avoid the risk of misclassification. Your company may want to onboard the employee and integrate them into the company organization as well as put them on the payroll. The individual working for your company may even want to be converted to an employee to get statutory benefits. Whichever the reason, many companies choose to hire employees to be their remote team.

A contract can include:

Make sure to seek legal counsel, whether in-house or not, when writing or negotiating contracts. Skuad has a team of legal experts in every country ready to write legally compliant contracts for your business.

In this article, you have learned the difference between a sole proprietor and an independent contractor. Sole proprietors are individuals who own their own business and do business in their own name as opposed to forming a company such as a limited liability company or incorporating as an S corporation or C corporation.

Whether your company is hiring remote employees or contracting with remote independent contractors or sole proprietors, Skuad can help. Skuad has a team of legal experts who can help you understand foreign labor laws and also make sure there is no chance of employee misclassification and that all contracts are legally compliant. For a demonstration of how Skuad can help your company hire remote workers in over 160 countries and pay them in any of 100 currencies, get a demo today.