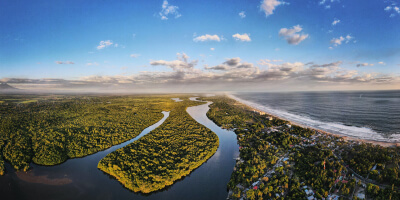 El Salvador is a developing country with a middle-income economy. It is the smallest country in Central America and is known as 'Land of the Volcanoes'. It is officially known as the Republic of El Salvador. The economy is ruled by the service sector. The unemployment rate in the country is 6.98% due to the impact of the pandemic.

It is one of the developing economies in the world. The recent Bitcoin law passed in 2021 made it the first country to adopt cryptocurrency as legal tender. The major industries include agriculture, telecommunication, energy, and manufacturing. It is one of the most industrialized nations in Central America.

The economy of El Salvador is ruled by the service sector and employs 58% of the total labor force. The main industries that contribute to the country's economy are agriculture, energy, manufacturing, telecommunications, and finance. Some industries like retail and banking are prominent in certain cities of the country.

Cost of living in El Salvador

Mentioned below is the average cost of living across the leading cities of El Salvador.

The economy of El Salvador is a lower-middle-income economy. It welcomes enthusiastic job seekers with good hard skills and soft skills. There are lots of job openings in the service sector and the industrial sector despite the economy being ruled by the service sector. From technicians to sales agents, there are wide openings for jobs in the country.

The process of hiring can be cumbersome for employers. The hiring cost involved may depend upon different factors, and the employers should be prepared to cover the cost involved in the hiring process. They are:

The table below depicts the average salaries that are offered to employees in El Salvador according to different sectors: -

The employment system is regulated and provides basic rights and benefits to the employees. Each factor may vary depending upon the industry. The Ministry of Labor issues the employment laws in El Salvador on the following aspects: -

How Can Skuad Help You with Hiring in El Salvador?

In an extremely competitive market, your primary focus must be to expand your operations and minimize your expenses. Hence, engaging in an expensive and prolonged recruitment process might make you spend more than you ought to. Skuad offers to streamline your hiring process with the help of experienced consultants. Connect with Skuad Experts to know more.