5 biggest benefits of being an independent contractor 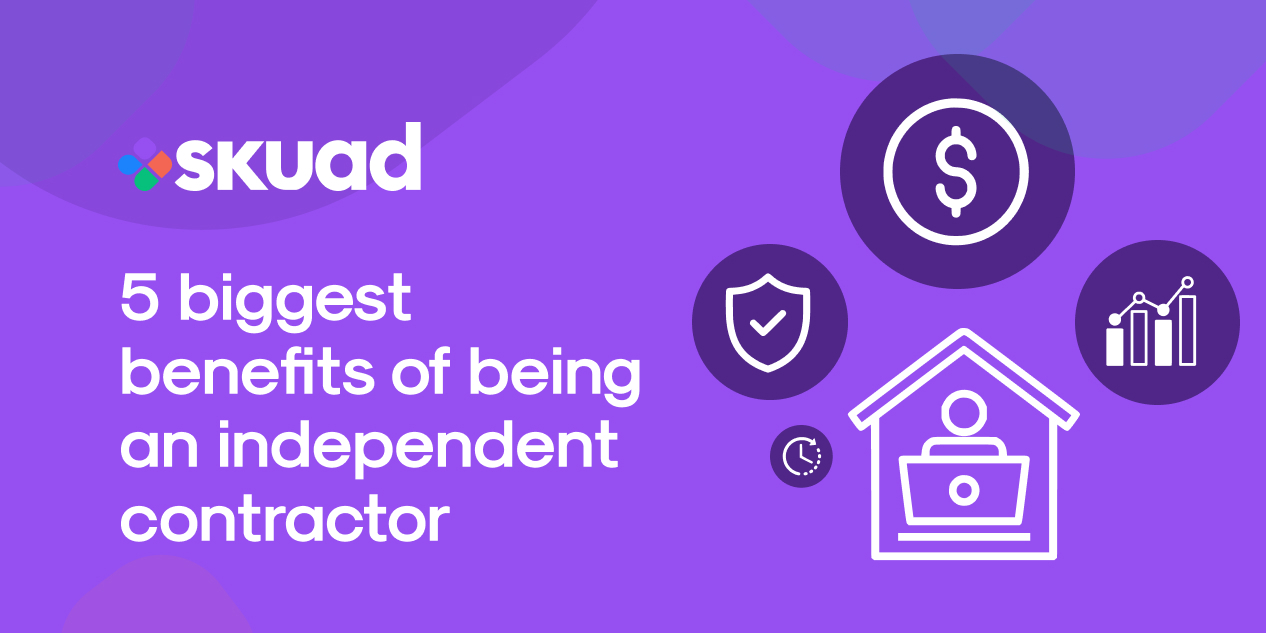 Who Is an Independent Contractor?

It is important to note that there is a legal distinction between an employee and an independent contractor. Companies that hire contractors need to be sure they do not treat the workers as employees. Simply noting in a contract that the relationship is contractual and not an employment agreement is insufficient in proving an individual is a contractor if the company treats the individual as an employee.

An employment relationship may generally exist if the following criteria are met. Employees:

The specifics of the legal definition differ by country, and each country has its laws and guidelines about what qualifies an employment situation.

Like most countries, the United States considers independent contractors different from employees. Because contractors are generally not entitled to the same benefits and labor law protections — depending on a specific country’s laws — and certain taxes do not need to be paid on behalf of the contractor, it can be cheaper for companies to pay contractors to do labor rather than to hire employees.

Labor laws would protect payroll employees in several ways. Depending on their country’s laws, employees may have the following:

Employers are also required to contribute to government programs such as social security and pensions, health insurance, and worker’s compensation insurance on the employee's behalf.

If an employer treats their workers as contractors but should treat them as payroll employees with benefits, then misclassification has occurred. The IRS has a set of criteria to determine whether an individual is an employee or a contractor. They look at behavioral control, financial control, and the parties relationship.

Behavioral control means a company can control how and what work is done through instructions and training. Financial control covers the finances involved in a relationship — whether a worker pays for tools, whether the worker has a profit or loss from work, and how the worker is paid. The relationship they look for covers whether there is a contract or employment agreement, the permanence of the relationship, and the provision of benefits

Benefits of Being an Independent Contractor

1. Contractors Are Their Bosses

Contractor work is excellent for people who want to be their boss. Without a boss or supervisor, contractors have more freedom to run their businesses and decide how to perform the work. Contractors can work from home or work while traveling. Business can be conducted on the beach on a laptop instead of a cubicle.

Independence can have drawbacks. Contractual work may not be suited for people who enjoy working in large groups and getting feedback from supervisors. For self-starters with discipline, independent contracting can be rewarding.

Employees are generally bound by their employment agreement to work for one company and to follow the policies set by the company, including attendance policies which dictate where and when the employee must be and how they must seek permission to take time off. Some systems require approval, for example, while other companies have a cap on how much time off can be taken per year. There may even be a "use it or lose it" policy that causes unused time off to be erased and not paid out at the end of each fiscal year.

There is no guarantee that employees can take time off. In some countries, such as the United States, there is no legally mandated amount of time off that employers must provide employees in most cases. Employees in the United States may have no paid time off, including annual leave, maternity leave, sick leave, bereavement leave, and other kinds of leave that countries around the world provide for their employees. Contractors can suspend their activities for as long as they want and do not have to adhere to any system that dictates how much time off they can take or when they can take it.

Working as an employee at an office means getting up early and making a long drive to work. Independent contractors working at home on their computers don’t have to worry about commuting, giving them more time to be with their families. Working at home allows a parent to supervise their kids and be with them throughout the day. Thanks to short-term contracts, contractors can adjust their calendars to work around life events such as weddings or unexpected emergencies.

Contractual work can be temporary, or the contract could be for a short duration. This means a contractor may choose not to renew the contract, or they may choose to take time off between contracts. Though this time off is without pay, contractors can take vacations and time off for other reasons without worrying they will lose their livelihood. This can lead to a much better work/life balance.

Employees' wages are generally lower than what a contractor can charge for similar work. This is because payments and deductions are taken out of employee paychecks. Employees also don’t have the ability to choose how much more they will make each year and are limited to whatever the employer decides to give them after performance reviews.

Contractors don’t have annual performance reviews and can decide to raise their rates. This can be especially beneficial in times of high inflation. Employees have little control over their income. After negotiation, the employer sets the wage and does not raise the wage. Contractors have full control of their prices.

In addition to setting their price for their labor and possibly making more income, there are always fewer, if any, deductions from their income. Contractors do not have their payments deducted to pay for the benefits, resulting in higher invoice payments.

There are certain tax benefits to being an independent contractor as well. Contractors do not have income taxes withheld and do not have contributions made to tax-funded programs such as unemployment insurance and worker’s compensation. Employees may be provided health insurance by their employer,, but the employees pay for it by having a percentage of their income deducted. Some of the employees' paychecks pay for insurance, such as unemployment insurance. Those are payments that contractors do not have to make.

Hiring independent contractors is also not without its risks and drawbacks. There may be no steady income nor job security as there would be as a payroll employee. They cannot receive promotions or bonuses, and if their rates rise too much, they may see a reduction in active clients. Unemployment insurance is not provided and there is no compensation if there is a lack of work. Health insurance, dental insurance, vision insurance, and more will also need to be paid out of pocket, which can be more expensive compared to insurance plans offered through an employer. Further, independent contractors do not have income tax withheld, which means they must pay income tax on their own and make quarterly estimated tax payments.

If your company is looking to contract with independent contractors, outsourcing options help manage invoices and pay contractors in their local currency. Contact Skuad to see how we can help you use contractor management systems to pay contractors to get work done.