An Overview Of The Types of Globalization 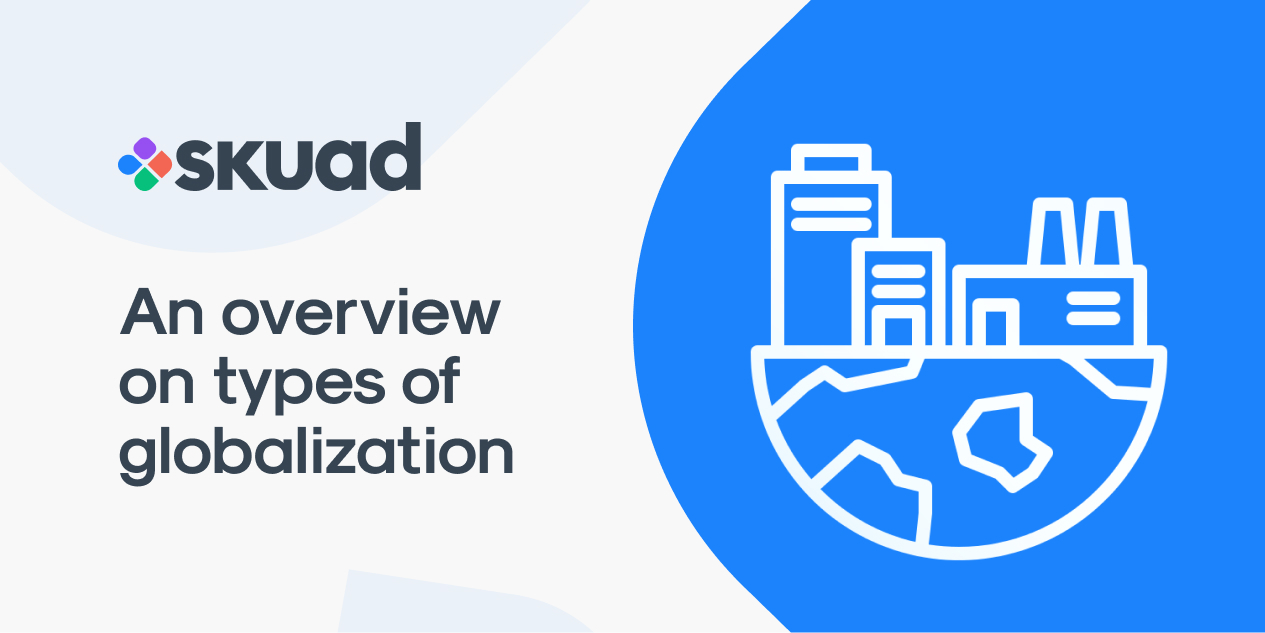 Globalization is at the forefront of many business owners' minds in a world that is more interconnected than ever, primarily due to advances in technology and social media. Globalization significantly affects economies, politics, business, culture, and the environment, forcing companies to learn how to navigate and benefit from these impacts. To do so, it’s essential for business owners to understand the main types of globalization and how they affect businesses. This article highlights everything you need to know about globalization and its types and how companies are directly involved in our rapidly evolving world.

Globalization is a term to describe the global spread of ideas, people, and knowledge. This phenomenon results in the integration and interaction of global markets, institutions, and governments. In business, globalization envelops the way capital and trade move globally.

Globalization is more prominent than ever. The world’s economies, chain supplies, currencies, and cultures are greatly intertwined. In a globalized economy, production is more efficient, prices are lower, and all countries benefit from economic growth. Any disruption in the global economy affects the whole world.

When a business participates in globalization, it moves from operating in one country toward operating in multiple countries. This brings companies benefits like access to new markets, increased revenue, decreased employment costs, and expanded brand presence. However, globalization also has adverse effects, such as environmental harm, increased competition, economic destabilization, and an even higher risk of pandemics. A business needs to understand both sides of globalization when expanding globally. This includes the impacts on the company and the communities it is expanding into.

In addition, globalization may be categorized by type, and those operating in global markets should be aware of these types.

Some examples of political globalization include:

Economic globalization defines the internationally connected free markets and trade, as well as the global movement of capital, business, goods, and people. Essentially, this term refers to integrating national economies to create a unified global economy. Economic globalization is evident in the presence of international banking institutions, multinational corporations, and the global supply chain.

Additional examples of economic globalization include:

Today, the global economy is more interconnected than ever, with goods and capital being rapidly transferred. According to the United Nations, economic globalization is an irreversible trend. The unstoppable shift toward economic globalization has numerous benefits for businesses and people worldwide, including economic growth, while instability and cyber security bring more risks.
‍

Some examples of cultural globalization that are evident today include:

In addition to the three primary forms of globalization, there are sub-types, which include:

Types of Globalization for Businesses

The same types of globalization – political, economic, and cultural – apply directly to businesses. Globalization looks like expanding one’s business globally through hiring international employees, establishing subsidiaries abroad, or working with foreign supply providers. All the types mentioned above of globalization impact and are shaped by business, as business involves the movement of people, capital, knowledge, ideas, and products around the globe.

Globalization has numerous effects on global business, which all business owners should consider. Some aspects of globalization that directly affect businesses include:

Globalization fosters increased competition for businesses. For example, as companies can outsource labor and production to countries where employment is cheaper, they can lower their prices. Thus, companies in the same industries have to compete by also reducing their labor costs and prices. As customers have countless options to choose from, competition increases even more. Customers look for the lowest prices and have quality and customer service standards that they expect businesses to follow (which is another form of cultural globalization!).

The rapid changes in technology associated with globalization impact business in numerous ways. The positive impact of this evolution includes more efficient production, increased audiences through digital marketing, and the flexibility of remote work technology. Some more negative effects include the challenging process of keeping up with rapid change, resources allocated to digital dexterity, and cyber insecurity.

While the increased exchange of knowledge brings more people the opportunity to become experts in various business fields, this also creates more competition for specialization among businesses. Additionally, companies must keep up with rapidly expanding knowledge, including cultural shifts, political events, and more.

The ease of trade that comes with globalization has resulted in a globally dispersed supply chain. While this assists businesses in reducing costs and increasing profits, disruptions in the chain can affect them immensely. Thus, companies must keep supply chain changes in mind and prepare for them in advance.

Do the effects of globalization apply to all businesses? Let’s answer the question, “Which of the following types of companies are affected by globalization?”

Understanding how globalization can help and harm one’s business is essential in today’s globalized world. Overall, expanding to new territories brings numerous benefits to companies, and remaining aware of the difficulties is the first step to navigating them.

Skuad helps businesses expand and manage their global teams with ease. With Skuad, companies can hire top talent in over 160 countries without setting up local entities, making it easier to tap into global markets. Schedule a demo with Skuad today to see how we can help your business go global.