Best Way to carry out Global Expansion: EOR vs Opening a Subsidiary 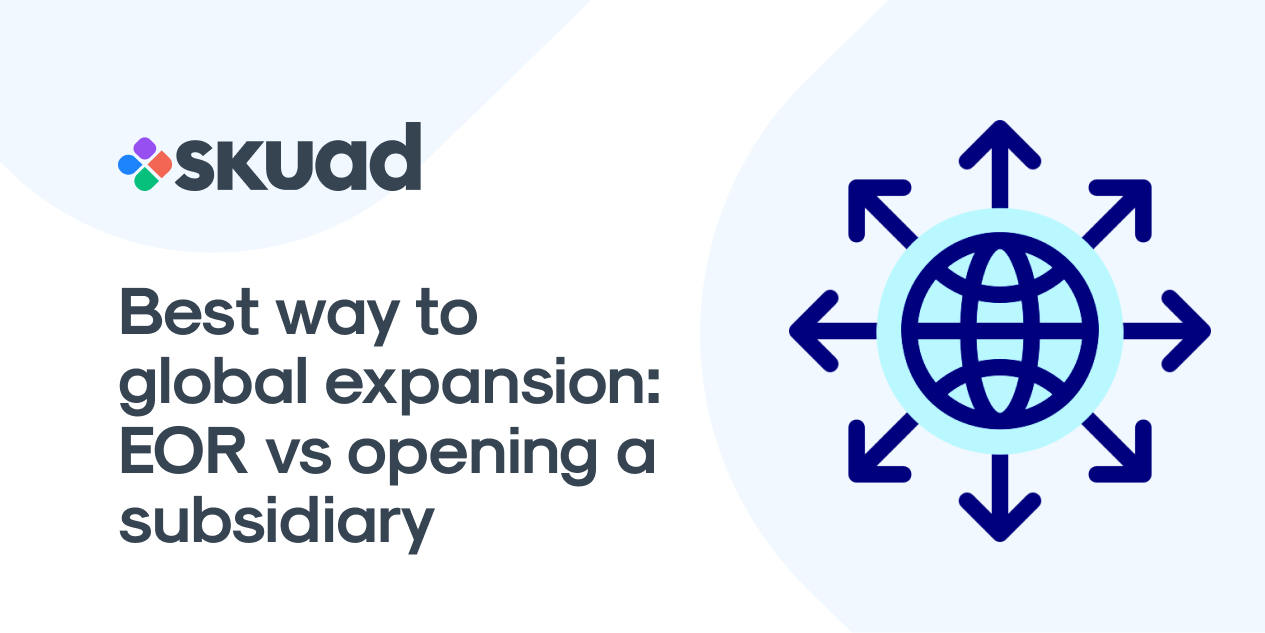 Global expansion is a great way to continue growing your business and brand. By entering foreign markets and spreading your brand awareness, you set yourself up for the potential of new customers and sales opportunities.

There are various ways to expand your business globally. Some enterprise companies may set up a legal representation called a subsidiary in countries where they want to do business. With its foreign subsidiary, a company can recruit local workers to run business operations in the foreign country and expand its business reach. Sometimes, these companies can outsource HR responsibilities to a global professional employment organization (PEO). Some companies that do not have a subsidiary or the means to set one up may work with an employer of record (EOR) to hire international employees as a part of their global expansion strategy.

In this article, we explain the difference between a foreign subsidiary and an international employer of record services so you can decide which is the best way to globally expand your business. It would be best if you based your decision on your company’s resources, timeline, and short- and long-term objectives.

What Is a Foreign Subsidiary?

A foreign subsidiary is responsible for its assets and liabilities and is considered a separate legal entity from the parent company. That means it’s governed by the laws and regulations of the country where the subsidiary operates. Thus, the subsidiary’s taxation and regulatory processes must abide by local laws.

This distinction makes a foreign subsidiary different from a foreign branch office. Although both can help businesses expand internationally, a subsidiary is legally and fiscally separate from the holding company. In contrast, the parent company is still liable for a branch office.

Pros and Cons of a Subsidiary

Whether you open a foreign subsidiary depends on your company’s global expansion objectives and current resources. Here we list the pros and cons of a subsidiary for you to determine how it might align with your business strategy and initiatives.

It Allows Entry Into New Markets

Opening a foreign subsidiary allows a company to expand its business reach and presence. By expanding into foreign markets, you have the potential to gain new customers and sales opportunities that you otherwise could not. This global expansion allows you to build your brand into one that’s recognized internationally to boost profit and revenue further.

It Has More Credibility Overseas

In many countries, having an official business presence like a foreign subsidiary generates more credibility than having a branch office. Local industries, governments, and business affiliates are more likely to take your company seriously because the foreign subsidiary must abide by all local regulations. Knowing foreign subsidiaries must follow local legislation can also increase brand trust and recognition in foreign markets.

It Protects the Parent Company

Setting up a foreign subsidiary usually costs several hundred thousand dollars, and the entire process can take six to nine months to complete. Additionally, some countries require the parent company to send their staff on-site to attend meetings and manage logistics in a foreign country. Companies that want to set up a foreign subsidiary must have significant investment from the offset, as these costs can add up quickly.

Operating in a foreign country requires a good understanding of local culture and regulations. It also means dealing with bureaucratic, political, and legal issues and processes usually different from your own country. All of this means that you’ll need to hire local experts to ensure you comply and avoid fines and legal action.

Additionally, hiring processes and norms vary between countries. To ensure smooth recruitment and onboarding of your international hires, it helps to have inside knowledge on job postings, interviewing, and statutory benefits. Working with professional employment organizations with expertise in managing HR tasks can help you with international recruitment and payroll compliance with local laws.

It’s a Pain To Dissolve

Closing down a foreign subsidiary can be tricky. You must consider processes such as closing bank accounts, liquidating investments, and giving your workers enough notice. In some cases, closing a subsidiary can take longer than setting one up.

What Is an Employer of Record (EOR)?

An Employer of Record is a global employment solution that hires international workers on your company’s behalf. The EOR becomes the legal employer and takes on the legal responsibilities of your global hires.

Working with an international Employer of Record services provider is another way to expand globally. The EOR can hire international employees and contractors for your company without you having to set up a foreign subsidiary. That means less cost and resources needed upfront to start employing workers worldwide. An EOR allows for more flexibility in your global expansion strategy, as you don’t have to commit a large sum of money and months of your time to establish an entity.

Most EORs also provide HR support for your international hires. That means the EOR manages all aspects of hiring, onboarding, payroll, benefits, taxes, currency exchange, contracts, probations, and even terminations. Thus, you can outsource these HR responsibilities so that your company’s HR team can spend more time and resources on growing your parent company.

Working with an EOR like Skuad can reduce your HR team’s admin time and company costs. Skuad is a global employment and payroll platform that ensures compliance with the employment laws and tax regulations of countries they hire in, so you can rest assured that your company is always in compliance when employing abroad.

Why Partnering With an EOR Is the Best Option

Setting up and operating a foreign subsidiary can be expensive, time-consuming, and resource-intensive. Unless you’re looking for a permanent long-term establishment in a specific country and are willing to commit to your company’s expansion there, partnering with an EOR for your global expansion strategy makes more sense.

Partnering with an EOR means faster expansion into new markets. There’s no need to set up a foreign subsidiary, so you can start hiring international workers right away. An EOR also manages HR tasks for your company, helping to reduce time and cost when hiring staff quickly and compliantly. An EOR enables you to recruit and retain top talent worldwide from onboarding to payroll.

Using an EOR allows you to determine if the new market has actual value and longevity for your business expansion. Doing so will enable you to learn more about the country’s culture and norms before you set up a more permanent entity there.