Wholly Owned Foreign Subsidiary: The Pros and Cons of Opening Your Own 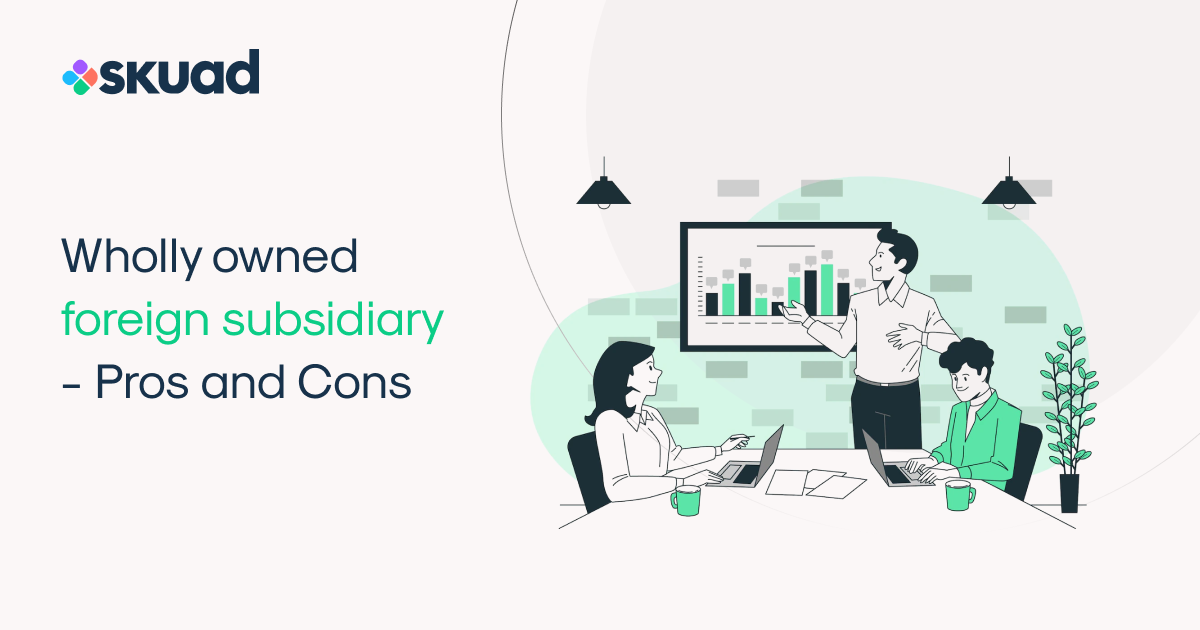 Businesses that are considering branching out into foreign countries are taking on a significant task. There are a lot of decisions to make during the process, starting from the very basics. For instance, one of the first choices you’ll need to make is whether you want to open a wholly owned foreign subsidiary to handle your operations abroad.

These subsidiary companies are a common way to begin operations in foreign countries, but they’re not the only solution. In this guide, you’ll learn what wholly owned foreign subsidiaries are, their pros and cons, and when you should (or shouldn’t) choose to open one for your business.

What Is a Wholly Owned Foreign Subsidiary?

The term “wholly owned foreign subsidiary” can be broken down into three basic terms.

These three factors make wholly owned foreign subsidiaries one of the most common solutions for companies that want to operate across international borders.

Since the subsidiary is founded and based in its own country of operation, there are fewer international rules and regulations than for operating a single company across borders. As a plus, the parent company owns the subsidiary in full, so there’s no doubt about who controls it.

This is different from a foreign branch of a company. A branch is just that: an offshoot of the original company that happens to be abroad. While this is simpler than a wholly owned subsidiary, you cannot hire full-time local employees at foreign branches. You will need to either employ local independent contractors or send full-time employees from your home country to staff the branch.

Subsidiaries can work well for many companies, but they can sometimes cause more problems than they solve. That’s why it’s essential to understand the pros and cons before deciding whether to open a foreign subsidiary of your own.

Benefits of Owning a Foreign Subsidiary

The most significant benefits of creating your own foreign subsidiary include:

Direct control: With a wholly owned subsidiary, your company remains in complete control over every aspect of the overseas branch of the business. Since you own it, you have complete control over how the subsidiary operates, what it focuses on, and who it employs. Many foreign subsidiaries operate more like a branch of the parent company than independent businesses. This can help keep your company’s approach to its operations consistent across borders, keeping things simple.

Legal requirements: Most countries have strict laws regarding what foreign entities can do within their borders. For example, a common condition is that international companies must open a local branch before hiring full-time employees. This is typically required to prevent foreign businesses from violating local labor laws or avoiding income taxes. Similarly, it may be necessary to open a foreign subsidiary if you want to invest in local property and equipment.

Drawbacks of Owning a Foreign Subsidiary

Subsidiaries do come with several crucial drawbacks, though. Before starting the process, make sure you’re prepared for:

Startup costs: Starting up a foreign subsidiary takes a significant amount of effort and resources. You’ll need to research your target country’s laws and government agencies to understand how to register a legal entity in the first place. You will then have to complete the registration process, pay the associated fees, and build an entire organization from scratch, which can be costly.

Legal risks: Wholly owned subsidiaries are fully the responsibility of their parent companies. If your subsidiary fails to follow local labor and tax laws, your business will be considered equally responsible for any fines and back taxes the subsidiary is ordered to pay. This can put your company at significant legal risk.

Reduced flexibility: When you open a foreign subsidiary, you take on a significant new responsibility as a company. You can't just close the office if you decide to leave that country. You have to perform additional administrative work to close the subsidiary, and you’ll still be tied to the country at least until the tax year is over. That reduces your overall organizational flexibility significantly.

If these drawbacks sound overwhelming, remember that wholly owned foreign subsidiaries aren’t the only way to branch out. You can also work with a global Employer of Record (EOR) to hire internationally.

Skuad offers EOR services in 160 countries, so you can start hiring contractors or full-time employees in the location of your choice. Instead of taking on the costs and stress of opening your own subsidiary, you can let Skuad do the administrative work and focus on choosing great people and expanding your business.

When Should You Open a Foreign Subsidiary?

There are a few situations where opening a new subsidiary makes sense. Some of the best reasons to open a foreign subsidiary include:

Still, a subsidiary is often a poor fit, especially for rapidly growing businesses. Instead, you may choose to work with an EOR.

Skuad’s EOR services allow you to hire full-time workers in the country of your choice without a subsidiary. You can learn more about Skuad EORs by reading our complete guide. Working with an EOR instead of creating a subsidiary may be the right choice if:

For most companies just starting to branch out into a new country, it’s not worth opening an entire wholly owned foreign subsidiary. The process can be costly and time-consuming, and it may expose your company to unnecessary taxes and legal risks.

A better solution is to go global the smart way by working with an experienced EOR in the country. For example, Skuad already has subsidiaries in 160 countries. By partnering with Skuad, you can hire full-time employees and manage payroll without needing to create a single new entity. Skuad will handle the paperwork, onboarding, legal compliance, and payroll. All you need to do is pick who you want to hire and get to work.

There’s no time like the present to start your business’s global expansion. Request your demo today to discover how Skuad can help your company grow without the hassle of managing foreign subsidiaries.