How To Terminate/Fire an Independent Contractor Compliantly 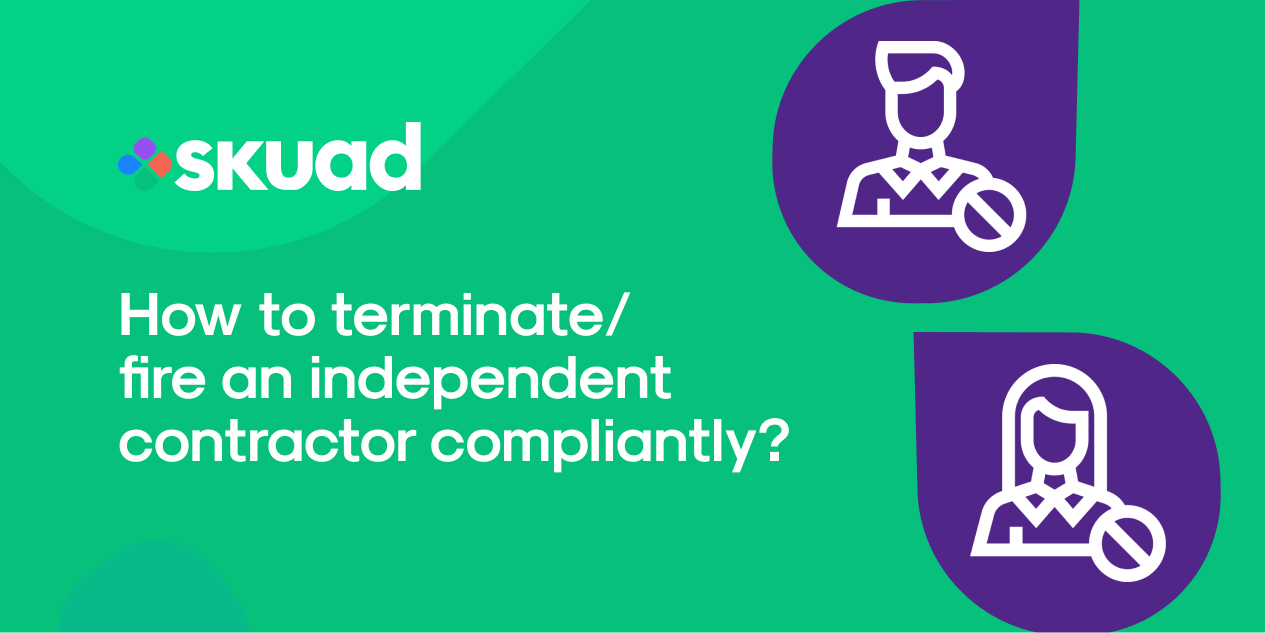 Self-employment has been on the rise over the past several years. The pandemic further increased the number of self-employed individuals — also known as independent contractors, freelancers, and gig workers — contributing to the economies of many countries around the globe. According to statistics published by Zippia, in 2020, approximately 36% of the American workforce was made up of independent contractors.

These numbers are only expected to grow going forward. Experts predict that by 2023, over one-half of the adult workforce in the United States will have participated in the gig economy to some degree. Statista predicts that in 2023, the gig economy will reach $455.2 billion.

If your company uses the services of freelancer workers, likely, the inevitable question will eventually arise: can an independent contractor be fired at will?

Technically, the answer to that question is no. Because the independent contractor is self-employed and is not your employee, you cannot fire them. However, if the contractor does not perform the work according to your written or verbal contract terms, you can choose to terminate your relationship.

In this article, we will discuss how to proceed if a freelancer or independent contractor does not perform according to the terms of your contract, what to do if you do not have a contract, and how to terminate this type of business relationship.

Document and Communicate the Issue as Early as Possible

Before firing an independent contractor, you must discuss the issue with them if you're unhappy with their performance. Informing the contractor of your expectations and pointing out their underperformance allows them to improve before you terminate the relationship. If the contractor's performance doesn't improve, you'll be documented in case of legal problems.

First, lay out your concerns about the contractor's performance in writing.

The DESC response, created by Sharon and Gordon Bower in their book, “Asserting Yourself,” is a guideline you can use during difficult conversations.

It's important to be clear about your expectations and stick to the facts. Don't make assumptions or accusations about the reason for the contractor's underperformance. Be sure to document your conversation, including the contractor's response.

Check Your Contract for Termination and Notice Provisions

Within your agreement, pre-agreed notice provisions should explain the warning period the company or the contractor must give the other before terminating the contract. A standard time frame is between 10 and 14 days' notice, although some contracts stipulate a notice period of a month or longer.

Notice provisions can also include an agreement to request any change in work or behavior before the termination of the working relationship. For example, your contract may stipulate that if you are not pleased with the contractor's work, you will give them a 30-day notice period to improve.

If your agreement includes notice provisions, you should provide the contractor with written notice of termination. Following these contractual notice provisions to the letter is essential to avoid a lawsuit for breach of contract after the fact.

Your written agreement should contain termination provisions, which provide the framework by which either your company or the contractor can terminate the business relationship. These should be clearly stated in the agreement to avoid any misinterpretation.

Termination provisions often include possible reasons for termination, which may consist of the following behaviors by the contractor:

*There is an exception to this rule: if the independent contractor engages in criminal conduct or fraud, you may terminate the contract immediately without adhering to the notice or termination provisions in your agreement. Such unlawful conduct can encompass damages or harm to company property, assets, employees, supervisors, or other contractors; harassment; tax evasion; or other illegal behavior.

Pay the Contractor for Any Work Completed

Some companies may want to know how to fire an independent contractor without paying them for the work they've done. The answer to this is simple: you don't! Even though you have the right to terminate your business relationship, you must pay the contractor for all work they have completed for you.

This holds even if you are displeased with the quality of the work provided. In the event of a payment dispute between your company and the contractor, it is in your best interests to obtain advice from an attorney, a law firm, or a legal professional before taking any action.

How To Terminate an Independent Contractor Without a Contract

Can you fire an independent contractor if no written agreement exists? Fortunately, even if you only have a verbal agreement with a contractor, you are still in luck. You can terminate your business relationship with the contractor in person or via email.

The most important thing to remember is to work in good faith. Your duty to act in good faith includes providing the contractor with a deadline before which to correct their behavior, performance, or work quality. When you enact such measures, the best practice is to document your actions in writing, which provides your company with a paper trail and, therefore, legal protection. Your documentation should include a time frame in which the contractor must improve and a notification that you will terminate the business relationship if said improvements are not made.

It's important to note that you are not obligated to act with good faith or to explain to the contractor your reasons for wanting to terminate your verbal agreement. However, good faith is a best business practice; your company's reputation may improve, and you could potentially avoid a lawsuit without a documented paper trail.

Can an Independent Contractor Sue for Wrongful Termination?

Independent contractors are not employees, so they cannot sue their clients for wrongful termination. However, they have the right to sue for breach of contract, which is why you must follow the provisions of any written agreement to the letter.

If your company fails to adhere to any part of the contractual agreement and terminates the business relationship, the contractor can file a breach-of-contract lawsuit. This is why it is paramount that you pay the contractor for all work completed, even if you are unsatisfied with its quality, and that you strictly stick to the terms of your written or verbal agreement or contract. If you fail to do so, you could find yourself and your company in legal hot water.

To learn more about Skuad, book a demo today.