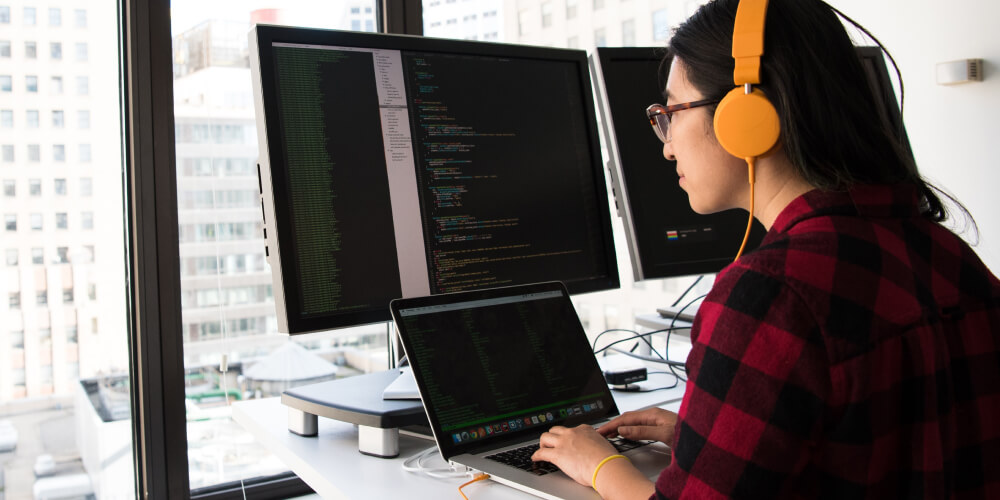 The work of a Visual Studio developer is highly fragmented and dependent on the project requirements. However, developers who know their way around the platform are always preferred, especially in companies that use Microsoft Visual Studio for their development tasks. The developers can work with various programming languages within the environment, including C++, .NET, Visual Basic, C#, XML, HTML, CSS, JavaScript, TypeScript, C++, and C.

However, you won’t have to deal with such issues while working with Skuad. Our team of recruiters has a per-verified list of Visual Studio developers from across the globe. Our platform is your one-stop solution to cover every aspect of hiring a new professional for team expansion. Despite the developers already on the roster, we can also help you find the best person for the job according to your requirements.

Microsoft Visual Studio is akin to a world of tools and functions beneficial for every type of developer. A comprehensive IDE that supports 36 programming languages will certainly be helpful for every organization into making things easier. When you hire Visual Basic developers, look for the candidate’s knowledge and experience in some of the technologies that are a part of the environment.

For instance, the developers can work with Razor, which is an ASP.NET product and allows inlining C# directly to views. For the .NET compiler, the developers can work with Roslyn. For JavaScript, it supports EcmaScript6, which is an IntelliSense code completion tool. Similarly, there are specific tools and supportive features for the languages supported by Visual Studio.

As this is a basic editing and debugging tool, developers require Visual Studio code and its associated features for accurate scripting and creating the program. Further adding to its scope of potentialities, Visual Studio Code can also be extended with compatible extensions that help add new languages, themes, and debuggers.

IntelliSense is an integral part of Visual Studio and highly regarded as a developer-friendly tool, especially for beginners who are still learning to code. IntelliSense helps with code completion, gives quick info, member lists, and much more.

As a code hinting tool, the developers who know how to work with IntelliSense find themselves taking less time in writing and completing the code. It supports a wide gamut of languages, and the developers can also add others with the help of extensions.

Visual Studio developers use the IDE and its supported libraries and tools to design, build, develop, and maintain a wide range of solutions or products. Since there are several languages supported by the platform, you can get any type of developer to work on your project, with a caveat that they can use Visual Studio.

Out of all the versions available for Microsoft Visual Studio, Version 7 is the most used platform and is widely acclaimed for its features and functionality. In addition, 87.2% of the websites which use Microsoft Visual Studio are using Version 7 for their development works. As a result, we find that it is a popular tool for developers and organizations alike.

Hiring a Visual Studio developer is driven by your company’s project needs. However, if you are an organization specializing in building video games, then Visual Studio is one of the best platforms to use for the development part.

As a tool with a global audience and widespread popularity, hiring Visual Studio developers is easier said than done. There is a lot of variation in terms of the expected salary, skill set, experience, and knowledge of the tools supported by the platform.

As an IDE, Visual Studio has applications in almost every industry. Because it covers various programming languages and their associated platforms, Visual Studio’s extensibility is one of the best factors about working with this platform.

Alaska Airlines uses Visual Studio to manage its websites and platforms. Airline companies have multiple platforms dedicated to different segments of their business operations. From a customer’s portal to booking systems and general informational websites, there are different grounds to cover. That is why they utilize the capabilities of Visual Studio to help developers take care of all the platforms from one place. Apart from Alaska Airlines, British Airways and Hawaiian Airlines also use Visual Studio.

IT-based companies like Hewlett Packard Enterprise also have different departments and operations to address, for which they need individual platforms. As Visual Studio is a complete packaged solution that helps them build programs, websites, and applications, it is probably a better choice for them as it addresses all their concerns in one place.

Today, every industry needs digital solutions, and Microsoft Visual Studio has the right tools and features to create them. However, to build them, you need to hire Visual Studio developers who are masters of their specific skills and can also work with Visual Studio to build the perfect solution.

When it comes to hiring Visual Studio developers, your requirements will be our primary concern, and we will customize our hiring process accordingly. As a result, Skuad can help you connect with qualified and professional developers who are masters of their skills.