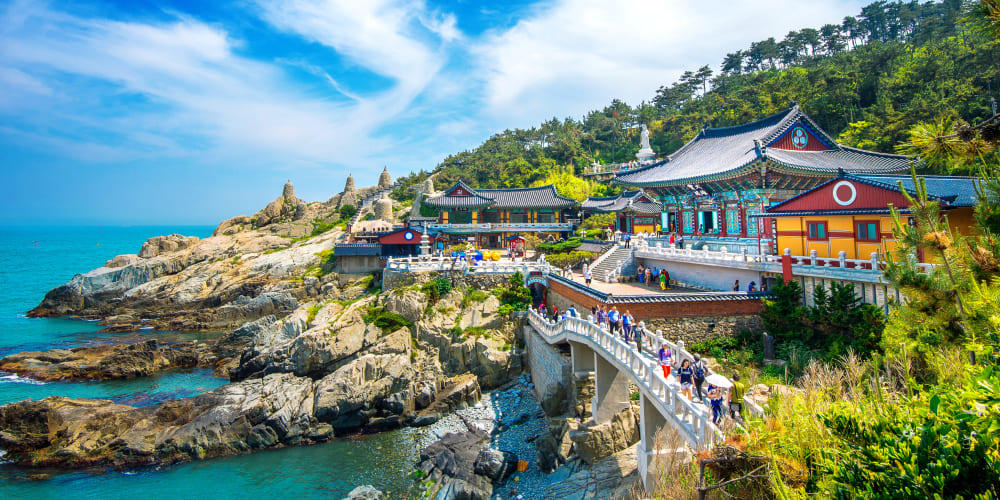 South Korea is one of the few countries globally that transcended from a low-income nation to one of the most successful economies globally in just five decades. Its highly developed mixed economy has majorly contributed to maximizing its GDP growth. South Korea's limited population, increasing literacy rate, and stable political system have led to a country's systematic development. Its export-oriented economy has fuelled the overall growth of the country and helped register GDP growth of around 7.3% on an annual basis from 1960-2019.

Experienced professionals willing to relocate to South Korea may find great opportunities for their career growth.  The country has some of the most thriving markets and is home to some of the leading global brands such as Samsung, Hyundai, LG, Renault, and has captured the zeitgeist of the 21st century. The country's overall GDP is expected to grow at 3.8%, until 2022, after recovering from the pandemic-related restrictions.

The country has also soared to new heights of achievements in the investment and banking sector, contributing about 34.7% to overall economic growth. Since the country does not benefit much from its natural resources, it maximizes the profits by producing some of the best electronic, automobile, and shipbuilding goods. South Korea is one of the major producers of global telecoms and consumer electronic devices. The household saving ratio of South Korea is relatively high, and the rising investments and expansion in the macro-economic policy promise high economic returns. The economy is likely to gain momentum as the government decides to reduce the regulatory burden on economic activity.

Since the country's rugged topography contributes minimally to the overall GDP growth, its increasing transformation to an industrial-based society has been quite beneficial for the population. With the world being digitized and urbanization taking over the agricultural sector, the South Korean economy stands as a potential market for lucrative job profiles and excellent growth opportunities. Today the country is amongst the largest manufacturers of electronic goods. It, therefore, needs skilled workers and qualified experts who can aid in the production and increase the overall revenue of various industries.

A glimpse of the industries in South Korea

Export-led industrialization has opened avenues for establishing some of the most lucrative industries in South Korea. A highly educated populace and skilled workers are responsible for the plethora of job opportunities and investment options now present in South Korea.

Cost of living in South Korea

Living in South Korea can vary between affordable and expensive, given the lifestyle prevalent in cities within the region. However, in comparison to other Asian countries, South Korea is not cheap by any means. Especially in housing, the cost would be somewhere in the middle, neither too expensive nor too cheap. The expats may be expected to spend about 30-40% of their monthly income for a nice place to live in South Korea. The cost also varies depending upon the location.

Cost of Renting in South Korea

The cost of renting may vary depending upon the size and location of the house in the country. City sides are normally more expensive. When the lifestyle and basic facilities are high, the rent may automatically rise. A one-bedroom apartment may cost around US $592, and a three-bedroom may cost around US $1547 in terms of monthly rent.

Mentioned below is the average cost of living across the leading cities of South Korea.

The top sectors that are expected to hire in 2021 in South Korea are: -

The strategic and forward-looking economic strategy of South Korea makes it one of the most lucrative job markets. Its highly developed mixed economy requires skilled professionals in various fields to boost revenue.

Major areas which have witnessed a recent growth rate

The major cities in the country have been flourishing in different sectors that provide opportunities for job seekers.

South Korea is ideal for business expansion, given its large and thriving economy, skilled workers, and current political scenario. However, there are a lot of factors that companies must keep in mind before beginning the hiring process, such as

The hiring cost will also vary according to the industry-specific job profiles.

Some of the lucrative salary packages in South Korea are administered in the field of teaching and content writing. The pay scale varies on the basis of location and the job profile.

As per the rules and regulations, all the labor laws and employment laws apply to all foreign nationals and expats. The law of the country gives all the employees proper protection. Some of the major laws and regulations passed by the government that ensures and govern employee rights are

Companies looking for remote talent may seek to hire in South Korea, where the demand for qualified tech workers is rising throughout multiple industries.

Top Roles and Skills in Demand

According to a 2022 Robert Walters Salary Survey, the workers in highest demand are:

According to Statista, the top five preferred employers in South Korea in 2022 are:

The top three growing industries in South Korea are:

A 2022 survey found that 66.5% of respondents selected “work and life balance” as the most important factor in determining a decent job. “Fair compensation” came in second at 43.3% of responses to the multiple choice question, followed by “good welfare” at 32.8%. Surprisingly, only 14% selected “job security.”

How Can Skuad Help You with Hiring in South Korea?

For hiring the best talent in South Korea, you must be prepared to invest considerable resources in conducting the recruitment processes. But with Skuad’s unified employment solution, all your worries are taken care of. Connect with Skuad to know more.