Independent Contractor Laws In California: Everything You Need To Know 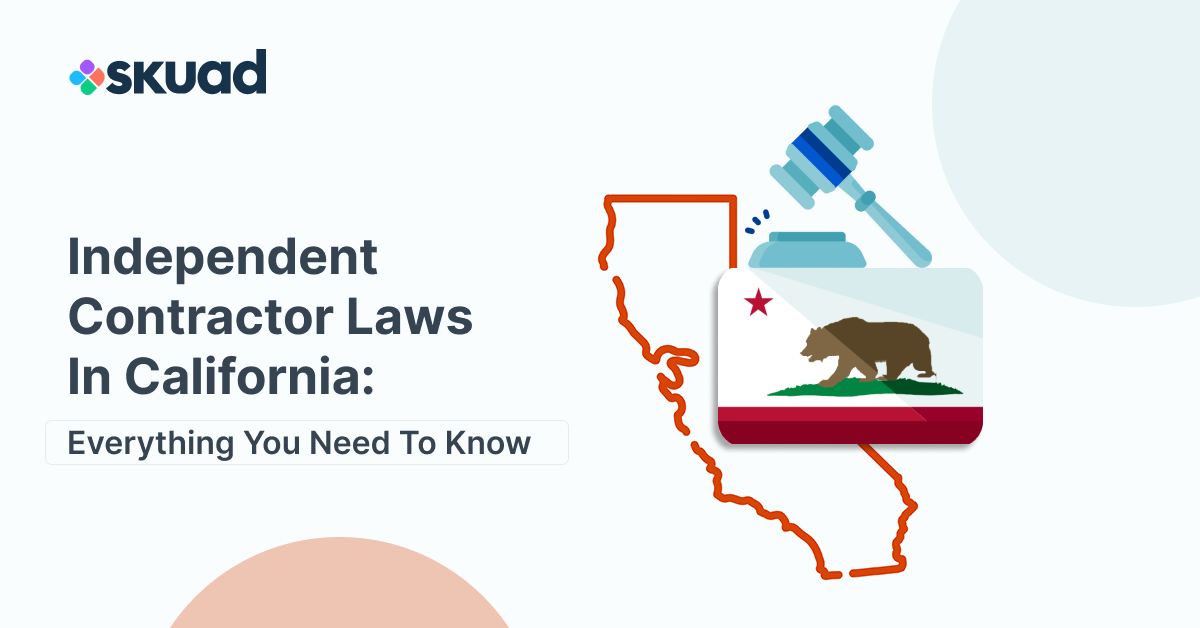 Freelancers and independent contractors throughout the world take satisfaction in having a wide range of career options. This kind of employment suits self-reliant free spirits well, from being able to choose each assignment to choose their own hours.

However, each narrative has two sides - it's not all coffee shops, lazy Mondays, and fun and games. With flexibility comes some responsibilities that are particular to gig economy employees. Working independence also implies that employees must handle legal issues on their own, such as taxes, rights, benefits, insurance, and other problems that would normally be handled by the company's human resources department.

Whether you're an employer or a worker - if you live in California, this essay will solve all of your problems. We've listed all of the important regulations that govern independent contractor California and discussed how they affect both businesses and employees.

In the following article, we will discuss:

There's a lot to cover, so let's get started!

What is an Independent Contractor in California?

According to federal legislation in the United States, three characteristics decide whether a worker should be designated as an independent contractor:

The Assembly Bill 5 and the ABC Test

Effective January 1, 2020, Assembly Bill 5 (AB 5) requires the strict "ABC test" to be used to determine whether a worker is an employee or an independent contractor (IC) for most California employment law purposes, including wage and hour laws, unemployment According to the independent contractor ABC test California, a worker is an IC if he or she satisfies all of the following requirements:

Notably, due to the adoption of Proposition 22, the ABC test is no longer used to categorize certain gig workers (discussed above). AB 5 also includes several exclusions for physicians, attorneys, accountants, insurance agents, and others.

Prior to the ABC exam, the Borello test had been used in California for over 30 years. Sarchet recalled that in 2018, the California Supreme Court rejected the Borello test in favor of a new ABC approach for determining independent contractor status.

This test is still in use, and it is utilized when Assembly Bill 5 and the more stringent ABC Test cannot be employed, or where statutory exclusions apply.

It is also known as the "right to control" test since it determines whether the employer controls the means and manner of employment. If the employer has the authority to govern the worker, the worker must be categorized as an employee.

The Borello test consists of several criteria, all of which are given here.

California Governor Gavin Newsom signed the revisions to AB 5 with immediate effect in September 2020. These modifications enlarged the number of occupations and services that require the Borello exam rather than the ABC test.

The complete list of exemptions may be seen here.

Even after completing the IRS 20 Factor Test, it may be difficult to ascertain the right employment status in some circumstances. Employers who cannot avoid employee misclassification of employees as independent contractors California charges on their own have two options:

Both employers and employees can file this form with the IRS so that the Service can establish the worker's status.

Form SS-8 asks you to explain the concrete scenario in detail; you cannot describe a hypothetical situation, just the one that is happening right now. This is complicated since submitting Form SS-8 still requires you to file an income tax return on time.

You can check for the official instructions here.

Staying compliant is one of the most difficult challenges for organizations seeking diverse, global labor pools. Each overseas country has its own set of labor rules, and things may quickly become complicated (and expensive).

With this in mind, we have developed a Global Payroll and Employment Platform that can manage everything on its own!

Skuad is in charge of onboarding international teams from over 160 countries, and the list is expanding by the day. All bases are covered, including local tax systems, legal papers, contracts, and invoicing.