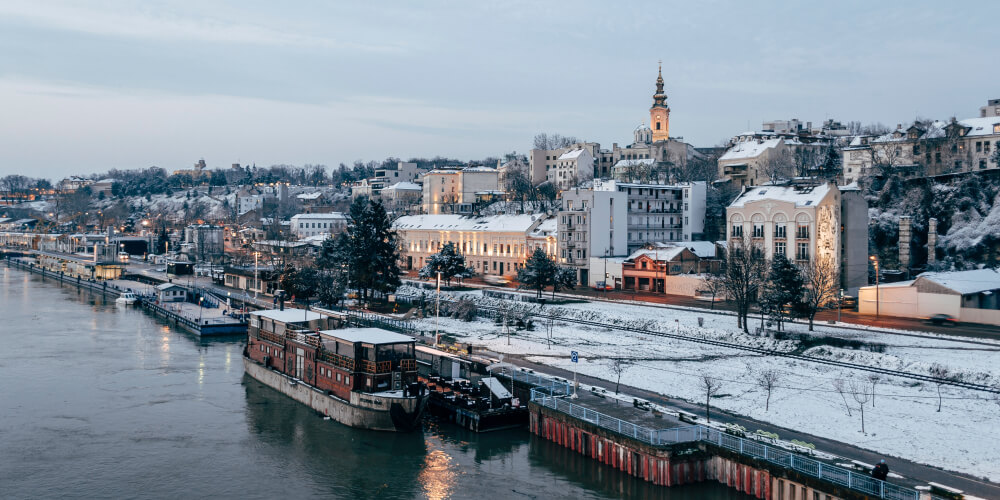 The Serbian economy is service-based and is ranked 78th in 2020 in gross domestic product. The tertiary sector heavily dominates the Serbian economy. The unemployment rate in Serbia in 2020 was 12.72%, which showed an increase of 0.03 % from 2019. Serbia has one of the highest unemployment rates in the region. The prominent industries of Serbia include the automotive, energy industry, machinery, agriculture, and mining industry. Trade also plays a major role in the economy.

Other emerging industries include tourism, telecommunication, and IT industry, and the manufacturing industry. Its multicultural and welcoming society is perfect for young and qualified professionals and graduates. The education, science, and technology sector has shown considerable growth in the last year. The Serbian economy follows the principles of a free-market economy. The economic heart of the country is Belgrade, occupied with stock exchanges and banks.

As of 2020, Serbia is the 75th largest economy in the world by nominal GDP (Gross Domestic Product). The service sector heavily dominates the economy with the lion's share of 67.9% and employs about 56% of its working population, followed by the industrial and agricultural sectors. The country has the best economy in Europe. The growth rate is very high compared to other European countries.

As per the National Bureau of Statistics reports, the Serbian economy bounced back in 2021 after the pandemic enforced restrictions, and its growth rate is greater than the other European countries. The GDP of Serbia decreased by 0.98 % in 2020 compared to 2019, and it has reached a valuation of US $53 billion. The GDP is expected to grow by 4.9% in the coming years.

Even though the pandemic has hit hard in the country, affecting industries like tourism and agriculture, the recent growth has shown that it has become the best economy among the European countries. Financial, IT, and health sectors are the emerging sectors in the economy.

Cost of living in Serbia

Serbia is the 56th best country to live in the world. Belgrade, a city in Serbia, is one of the great places to live in southeastern Europe. The country is known for its delicious cuisine, culture, and nightlife. Serbia currently has the 123rd highest cost of living in the world.

The cost of living on rent in Serbia depends on the locality as well as the features available. You can expect to spend around $312.97 (30,926.41 Дин), depending upon the area for a one bedroom apartment. The rent can increase or decrease based on personal preferences.

Some of the prominent sectors that will lead the hiring process in 2021 in Serbia are: -

Serbia has a free-market economy and is heavily dominated by the service sector. Consequently, it is keen on hiring skilled individuals and highly qualified professionals trained in various hard and soft skills. From high-level software developers to creative graphic designers, there are fantastic job opportunities available for all these skills.

As a country, Serbia has managed to promote various cities for industrial and economic development. In addition, Serbia is a beautiful country with delicious cuisine and nightlife and has got special work opportunities for many enthusiastic immigrants and expats.

Belgrade - It is one of the oldest inhabited cities in the world. The city is the financial center and economic heart of Serbia. It consists of commercial banks and the Belgrade Stock Exchange. Also, it is one of the IT hubs in southeastern Europe. There are a lot of job opportunities in the IT sector.

Novi Sad - Novi Sad is one of the economic and cultural cities of Serbia. It is the most fertile region in Serbia. The main industries in the city include the financial and banking sector, insurance, agriculture, and energy sectors.

One of the most important aspects of the recruitment process in Serbia is the cost of hiring. There are various factors that need to be considered before making a hiring decision, such as: -

Here are the crucial details pertaining to the average salaries that professionals can expect in various roles in Serbia: -

Serbia enjoys a well-defined employment system with clearly stated federal as well as provincial laws. Some of the key aspects that govern the employment market in Serbia are minimum wages, work hours, overtime payment etc. The Serbian Labor Law governs the following aspects regarding the employment market: -

Serbia ranks among the top ten countries worldwide for the number of freelancers. This trend alone – not expected to wane anytime soon – should highlight how dynamic and exciting this country's remote work world is.

In 2022, one of the most thriving sectors for remote employment in the country is the tech industry. This becomes apparent after a quick browse on BelgradeGetsDigital, a recently launched platform to attract digital nomads to Serbia. The Belgrade-based website is rapidly becoming a hub for savvy Serbian and foreign IT freelancers open to new work opportunities.

Unsurprisingly, the most in-demand job titles in the country include:

The top five companies (based on anonymous employee reviews) in Serbia in 2022 are:

How Can Skuad Help You with Hiring in Serbia?

Organizing a hiring process in Serbia is an extremely cumbersome task involving various rules and regulations. Factors like cost of living, cost of hiring, and training are some of the factors that have an impact on the decision. Instead of investing your time and resources in this complicated process, conduct hassle-free recruitments with Skuad unified employment solution. Connect with Skuad to know more.