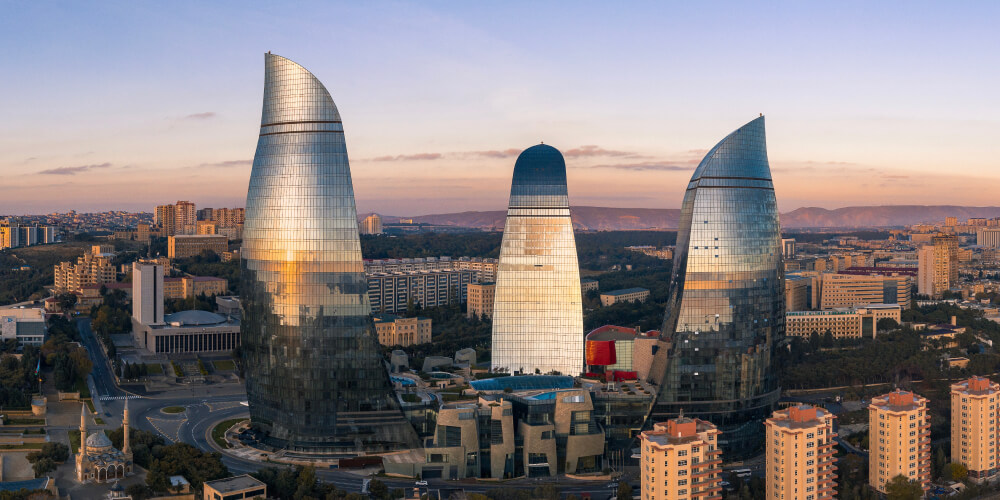 Azerbaijan is a fragmented piece of the former Soviet Union (USSR). Presently its surrounded by Russia, Georgia, Armenia, and Turkey. The country has a huge number of natural resources discovered and excavated during the very early period of World Wars. Sectors like energy, finance, tourism and science and technology started growing at a very rapid pace.

The command of the country over its resources is being used and exploited to its fullest. Azerbaijan gained independence in 1991; there has been a steady growth economically with a few exceptional situations. The population of the country stands at 10 million persons. Azerbaijan was converted to a free economy only by 2009; following this rule, a lot of foreign direct investment attracted the country due to the presence of petroleum products. Industrially it became one of the most developed countries among the USSR prodigies.

By the estimate of 2019, the GDP of Azerbaijan stands at US $45.284 billion. The major contributor to the GDP is the energy and natural resources. Following this, Agriculture, tourism, science and technology and finance form the majority of the GDP contributor. Post-free-market status, Azerbaijan was given 25 under the ease of doing business criteria. This led to cost minimization in the industrial sector, which indirectly gave way to many financial institutions. The pandemic did not hinder the production of resources on a greater level, though it should be noted there was a slight cut in the employment levels. The unemployment level has seen a very significant decrease over the years from 1999 till 2021. The rate stands at 6.27% as per reports produced in 2021, which indicates an increase of 1.75% due to pandemics.

Azerbaijan is one of the leading countries seeing a processed and steady growth in its employment rate at 2.2% annually. The natural resources form over 3/4th of the natural resources obtained. Azerbaijan is often included in the Chinese plan to connect the world through one belt, one road project. Corresponding to the economic growth, there is a significant improvement in social standards like educated youth, number of people employed under the age of 28, mortality rate, women rights, etc.

The fertile land, the oil basin below the land, the hard-working minds have taken the country way ahead than anticipated. There has been a 20-fold increase in its economy, which is a great deal compared to many similar situated countries.

Cost Of Living in Azerbaijan

The country is quite moderately affordable, but at the same time, it cannot be considered cheap. The average cost of living in Azerbaijan is US $544, which is approximately 32% costlier than in India. It ranked 160th in the most expensive country to live in. But when compared to the USA, Canada, Australia, studying, working in Azerbaijan is more affordable.

The cost of living in Azerbaijan is dependent on the population of the location. The salaries of the employees of different sectors don't have a wide range. Thus, it makes renting a place easier corresponding to the working area, and income earned. It's estimated that the monthly salary is enough to survive for six months.‍

Due to a large number of factories, industries, and mines, many people are involved in the manufacturing sector. The labour market is seen to have a lot of inclination towards engineering skills among the youth and the working class.  Major skills that are in great demand are: -

The citizens are very smart and have a knack for grabbing opportunities when offered. In this case, it is very important to form a competitive hiring process that will challenge the intellect and find yourself with the best of the best. Factors listed below are to be mined while recruiting-

The table below depicts the average salaries that are offered to employees in Azerbaijan according to different fields: -

There are special laws and agreements regarding the employment and labour forces. The laws state the importance of abiding by the rules as a mandatory action, and any action or agreement against it is proved void or invalid against the court of law. When joining, a proper agreement of do's and don'ts has to be signed by both parties. Further, some rules are -

These rules are based upon the Employment Code of the Republic of Azerbaijan and the Constitution of Azerbaijan.

How Can Skuad Help You with Hiring in Azerbaijan?

In a highly competitive market, your focus should be on expanding your operations and minimizing the expenses. By engaging in an expensive and prolonged recruitment process, you end up spending more than you ought to. Skuad offers to streamline your hiring process with the help of experienced consultants. Connect with Skuad Experts to know more.